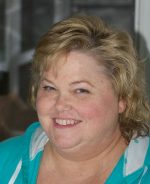 I’m Deb, a married, 53 year-old mother of a teenager.  As mentioned in the “About Us” section, my sister, Laura, and I have struggled with our weight our entire lives. I am currently still very overweight and have been slow to find a way to eat low carb on a regular basis.  I would say that I am now officially “on plan” more than I’m off and definitely feel more healthy.  I’m  working to make the difficult transition from “on-and-off” to “way of life.”

Like most overweight people, I have been on many diets. I lost a lot of weight with Weight Watchers (WW) over the years, and learned some important habits from them that have helped me with low carb. I was never able to maintain the weight loss, however. As I became older and more insulin resistant, WW stopped working for me altogether, regardless of how diligently I tried. I would lose about 6 pounds the first two weeks, then the needle refused to move on that damn scale, even when I felt like I was starving. One of the things I like best about eating low carb is that I feel much more relaxed with this plan. I used to worry about what I was eating all the time, constantly trying to calculate points/calories throughout my day.

Counting points with WW was fairly complicated a few years ago. I knew the point-counting was getting to me one day when I was in Starbucks, mentally counting the points for the coffee I was planning to order, when one of the employees gave me a little paper cup with a pastry sample. I tried the delicious morsel, immediately trying to figure out the WW cost while tossing the empty paper cup into the trash. There was an older gentleman standing next to me in line who suddenly looked at me and said, “two points.” I stood staring at him, immediately thinking to myself, “are you kidding me, that tiny little piece couldn’t have possibly been 2 points,” followed by, “boy, he has some nerve assuming I’m on WW just because I’m fat,” and, finally, “ohhhh, that was a basketball reference,” as I realized that the trash can had been a few feet away from me when I tossed in the cup. I wonder what he must have thought as I stood there, speechless, as all of these thoughts went through my head (no doubt with the accompanying expressions of surprise, indignation, and dawning understanding crossing my face).  I finally said, “Oh, yeah — heh heh — thanks!” and rushed out of the coffee shop. Suffice to say, counting points is just a little more mental investment than I’m capable of at this point in my life. Sure, there is some ‘counting’ that is helpful in low carb, but it is far less complicated and time-consuming.

So, why low carb? In the last few years, Laura and I have read many books by doctors and other experts on what healthy nutrition for human beings looks like. I came to the conclusion that there is no perfect diet for everyone. It’s an interesting time in nutrition these days — there is a growing portion of doctors and individuals that believe that the low fat/high carb diet we’ve been told to eat for the past 30 years is largely responsible for the alarming rise in diabetes, obesity, Alzheimer’s and heart disease. After much research, and seeing my sister lose 130 pounds while completely transforming her health, I’m convinced that eating low carb is the answer for me as well. In fact, I’m betting my life on it.

At 7:00 a.m. on October 10, 2012, I had a heart attack.  I was 49 years old. My husband had already left for work, and I was alone in the house with my 10 year-old daughter, who was still asleep. I woke up with intense pain in my shoulder. I lay there for a while, trying to convince myself that the pain was from a workout with my trainer the previous day, but I knew it was a different kind of pain. I got out of bed and went downstairs. By the time I got there, I had broken out in a cold sweat and felt nauseated. I called an ambulance, concerned that it might be a heart attack, yet not really believing that it was. While waiting for the paramedics to arrive, I called Laura to come over and take care of my daughter, Emma. Laura lives just a few miles away, so she arrived at my house just as I was being put into the ambulance. I still remember how torn Laura was, wanting to come with me in the ambulance, but needing to stay with Emma, who was upset after having woken up just in time to see me being put on a gurney and wheeled out. I couldn’t stand the thought of Emma not having Laura with her, so Laura remained with Emma (rather than a neighbor), as I was rushed to the hospital.

At the hospital, I didn’t really believe that I was having a heart attack until the ER doctor told me that I was, and that I needed an emergency procedure to have a stent put in my artery. The only thing I could think about was my daughter and what her life would be like without me. She was just too young to lose her mother. As they were whisking me off to the catheterization lab, I desperately told them that I had a 10-year old daughter who needed me. I wanted them to know she was out there — to stay invested in my outcome — because they weren’t just saving me, they were saving Emma, who needed her mother.

I don’t remember much about the procedure, or even the first day or two afterward. I do remember feeling that I had brought this on myself because I never lost the weight I needed to lose, beating myself up for my failure. I knew that when people heard what had happened they would say, “Well, of course she had a heart attack, look at her.” And I felt that they would be right. It seemed as if it was too late for me — I couldn’t imagine ever coming back from this.

After an event like this, one is prescribed all kinds of medications, sent to cardiac rehabilitation, and bombarded with crazy low fat/high carb nutritional information. Not only was it overwhelming, none of it seemed to make me feel much better. I was also just plain scared. For at least six months after the event, I was sure I was having another heart attack every time I had any little ache or pain. During my struggle to recover, Laura went into serious research mode. After a while, she started sharing some of the information she found with me. When I began to learn that coronary artery disease is often correlated with insulin dysfunction, controlling insulin levels through a low carb diet made perfect sense to me. Trust me, this is not an easy path for someone who has heart disease, as it goes against most of the current conventional wisdom. A large portion of the medical profession still disagrees with a low carb diet, especially for someone with my medical history. I was a little afraid to go against the status quo at first. However, there are plenty of “gold standard” studies done over the last decade that make a very convincing scientific argument that a low carb diet would probably benefit a large portion of the population, especially individuals, such as Laura and me, who have insulin dysfunction (hyperinsulinemia or insulin resistance). In the end, I figured I would decide what is right for me and live or die by my own informed decision. I’m good with that.

The heart attack was a defining moment for both Laura and me. She had made progress with her weight loss over the years, but after doing tons of research related to my health issues and her own (as well as family history), she got more focused about low carb and steadily made progress. Later, after she recovered from a prolonged viral illness three years ago, she became deadly serious and lost the remaining 75 pounds through a very low carb approach, as well as giving up gluten and grains altogether. She has now maintained her weight loss for nearly two years, so she has definitely fully transitioned to a low carb lifestyle. More than that, she is healthier than she has ever been, in ways that cannot be explained by weight loss alone. By changing the foods she eats, she was able to heal many of her long-standing health issues. I’ve witnessed the dramatic improvement to her quality of life as a result.

Now, you would think that having had a heart attack would have made me get right on a low carb diet and get healthy, but it has been a struggle. My challenge has been to find a way to make truly healthy food that I enjoy without feeling deprived or feeling like a slave to cooking and cleaning. And while Laura has found the formula that works for her, I am still finding what works for me. Honestly, discovering the precise ‘formula’ to make this way of eating work for you and your life is the hardest part. The rest is simple. It begins and ends with nutrition. It wasn’t pills that turned Laura’s health around; she just changed what she ate. I urge you to refer to some of the resources available on our site to help you better understand the science. Distill that information, and you will find that a properly formulated whole foods, low carb diet is simply about eating healthy meat, vegetables, and fats, along with a level of “low” carb that works for your metabolism. And stay away from processed foods! Nothing shocking here. Granted, it’s not always easy to do, given the current nutritional climate and our carb-centric society, but it is simple and it makes sense.

So that’s my story. I have a long way to go, but I take comfort in having seen someone with my kind of metabolism succeed. After reading as much as I can on the subject, I am finally beginning to believe that the diets I tried in good faith were unsuccessful, in large part, because they weren’t right for my metabolism. Not because I have some inherent character flaw, which is what I secretly believed. I know that it’s still my job to find a way to make low carb work for me, but I’m finally beginning to forgive myself for past diet failures. It’s amazing what a difference that makes.

Thanks for stopping by!