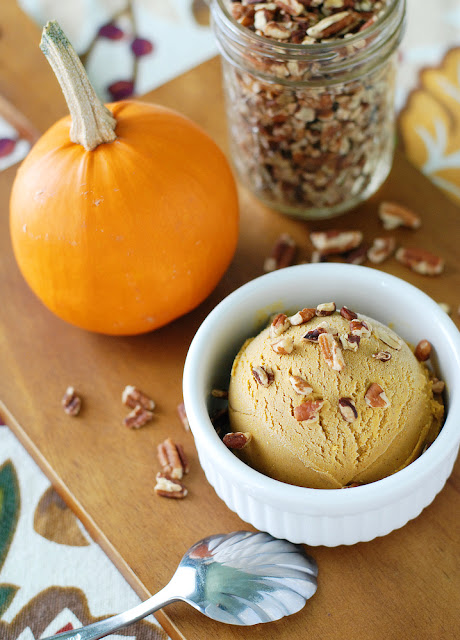 If you love pumpkin and spice, this rich Low Carb Spiced Pumpkin Ice Cream will rock your world. It’s loaded with rich, pumpkiny goodness for just over 4 net carbs per serving!

We’re back with another pumpkin recipe to celebrate this wonderful Autumn season. My Chai-Spiced Pumpkin Pots de Creme post of several weeks ago was essentially a baked custard. This Spiced Pumpkin Ice Cream is a frozen custard. Can you tell I’m a fan of custard (as well as pumpkin)?

Several years ago, before I transitioned to keto, I tried Trader Joe’s Pumpkin Ice Cream. It was mighty tasty. However, an equivalent portion of their pumpkin ice cream is about 28 net carbs, which is 7 times the net carbs of mine. That’s more carbs than most of us following keto consume in a day! Soooo, last Autumn, I decided to come up with a low carb spiced pumpkin ice cream. I have to say that I’m quite pleased with it.

One of the great things about custards, besides being delicious, is that they are ideal for adapting to a keto/LCHF (low carb high fat) way of eating. Regular (high carb) ice creams typically use cream and milk, so changing those out for either all heavy cream or for a combination of heavy cream and almond milk or coconut milk from the carton lowers the carbs. In this recipe, I use only heavy cream, but it is balanced out by the pumpkin puree so it is not overly creamy (yes, there is such a thing.)

The sugar is fairly easily substituted for a low carb natural sweetener. My go-to approach for low carb sweetening is a combination of xylitol and liquid stevia, which is what is used here. I also added a small quantity of blackstrap molasses in this case, which gives the flavor a brown sugar dimension. Molasses is a sugar, however, but because I use only two teaspoons here, the effect is only 0.68 additional carbs per serving. While I find the difference negligible, you could certainly leave it out if you prefer. 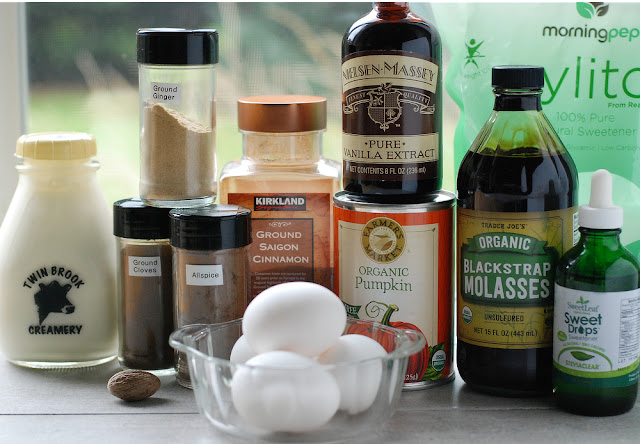 The last tweak that I use for low carb ice cream is the somewhat odd addition of a small amount of vodka and xanthan gum. When using non-sugar sweeteners, ice creams freeze considerably harder than when using sugar. The small amount of alcohol prevents the ice cream from freezing as hard. Have you ever put a bottle of vodka in the freezer? It doesn’t freeze. The xanthan gum is a natural emulsifier that helps with texture and reduces iciness. It is often used in mass-produced ice creams as well. The combination of vodka and xanthan gum really improves the ‘scoopability’ of low carb ice creams, without adding a noticeable flavor or booziness. Both of these ingredients can be omitted if desired. However, you’ll want to let the ice cream sit at room temperature for 10-15 minutes before serving to make it easier to scoop.

If you’ve never made a stove-top custard before, don’t worry. It’s quite straightforward. The recipe walks you through the steps. However, if you’d like a little more detail, just refer to my Mint Chip Ice Cream post. Do be sure to pass the custard-pumpkin mixture through a fine-mesh strainer (like these). Because pumpkin puree can still have some fibers, straining gives the ice cream a smoother texture. It also catches any larger bits of spices as well. And if you’ve slightly overcooked your custard, it will strain out any unwanted pieces of cooked egg. Press firmly on the solids with a rubber spatula to release as much of the custard as possible. 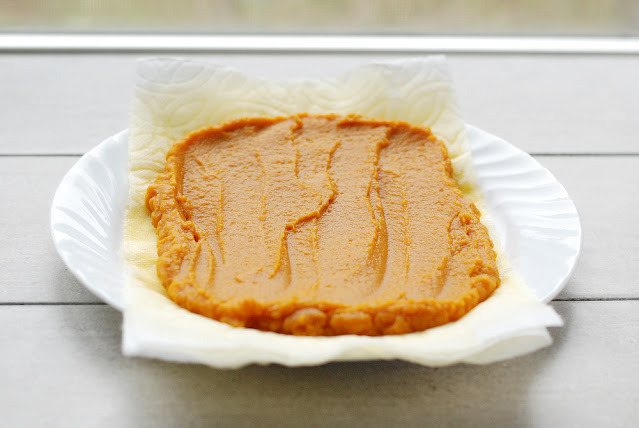 For the ice cream maker, Deb and I both use a Cuisinart (model ICE-21) with a 1.5 quart capacity. If you already have an ice cream maker that you’re happy with, that’s great. However, if you don’t have one or are looking to upgrade, we’ve been more than satisfied with ours. 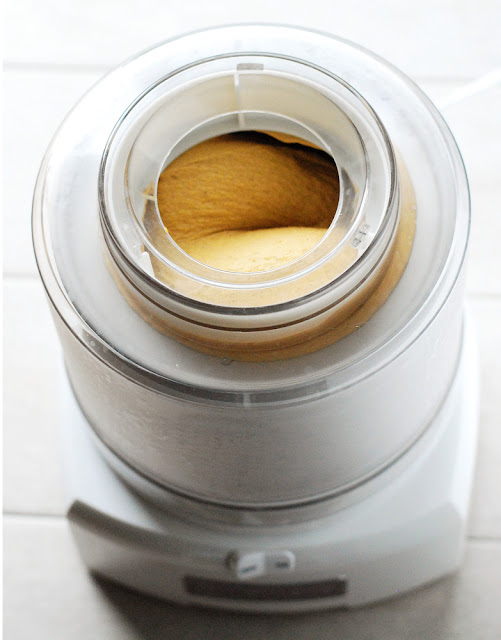 I find a digital instant-read thermometer an essential tool for making custards because the temperature is the most reliable way to know if it’s cooked enough, but not too much. Thermometers are useful for so many things; in fact, mine is one of the most-used tools in my kitchen.

This Low Carb Spiced Pumpkin Ice Cream is one of my favorite desserts this time of year. It’s great on its own, with a few pinches of cinnamon for garnish. However, I nearly always serve it with a sprinkle of toasted pecans or other nuts. I’m a fan of the creamy-crunchy texture contrast. The ice cream is also delicious alongside a slice of low-carb gingerbread (look for my recipe in the next few weeks). 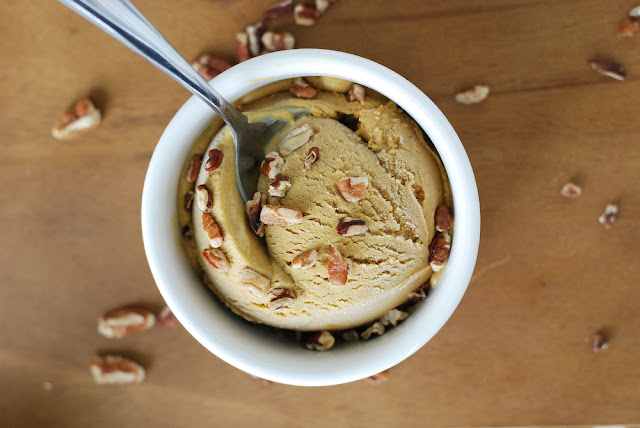 I hope you’ll give this scrumptious ice cream a try. While it’s not quite as quick and easy as some of my other desserts, it’s so worth a little extra effort. Let us know what you think!

If you love pumpkin and spice, this rich Low Carb Spiced Pumpkin Ice Cream will rock your world. It's loaded with rich, pumpkiny goodness for just over 4 net carbs per serving! Because chilling time is required before churning, it's best to make this a day ahead.

*I use Living Cookbook 2015, along with package information and data from www.nutritiondata.self.com, to calculate the nutritional information for my recipes. Thus, I can make no guarantees as to the accuracy.