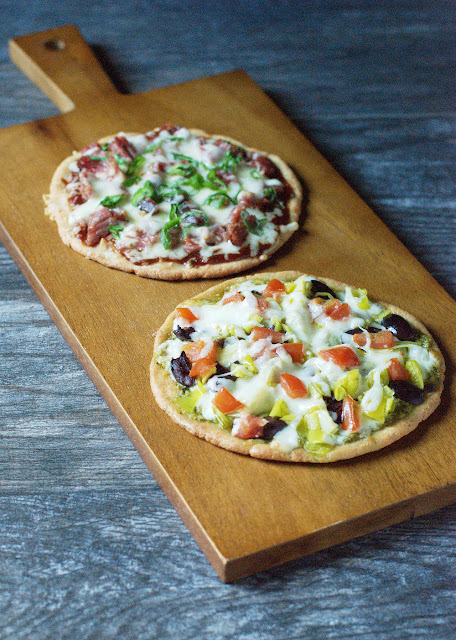 Yes, Virginia, it’s true — there is such a thing as delicious low carb pizza! These crispy, thin-crust personal pizzas with your favorite cheese and toppings really deliver on taste and texture. The partially-cooked crusts can even be made ahead, topped to order straight from the refrigerator or freezer, and baked off for piping hot, melty goodness in less than 15 minutes. It’s a dream-come-true: low carb pizza that the whole family will love.

After more than a year of low carb eating and trying various low carb “pizza” recipes, I had just about given up. I’ll admit that there are recipes that give you the flavors of pizza on various “crust” delivery systems: sauce, cheese, and toppings on vegetable bases (zucchini, eggplant, etc.), meat bases (‘meatzas’), and assorted other low carb crust attempts. It was after the cauliflower crust experiment that I threw in the towel and resigned myself to a life without pizza. No offense to anyone out there who likes cauliflower crust, but all I can say is “ick!”

If you’ve been a low carb cook for long, you’ve probably seen the “Fathead Pizza” recipe (or variations thereof) online. I eventually did as well, but the recipe features such a strange assortment of ingredients that I had to wonder how it could possibly work and actually taste good. I was more than a little skeptical the first time I made it. Well, to my surprise, it was pretty darned tasty. It didn’t fall apart, and it didn’t taste funky, either.

There were a few things I would change, but that’s what good cooks do — we put our own spin on things! After trying several variations, I came up with my own adaptation of a recipe from Kim of LowCarbMaven.com. Kim changed up the proportions of the original recipe and added whey protein powder (or oat fiber) to give the crust a more bread-like texture. I had also seen recipes that used psyllium husk powder.

After some experimentation, I ended up changing the proportions a bit from Kim’s recipe and added psyllium husk powder to the protein powder, along with some other seasonings. So, if the original recipe didn’t have enough strange ingredients, I’ve added a few more! But I’m quite pleased with the flavor and texture, so it’s worth a few more ingredients to me. Of course, the crust doesn’t have the chewy texture and yeasty flavor of a well-made wheat flour pizza, but it’s more than respectable. 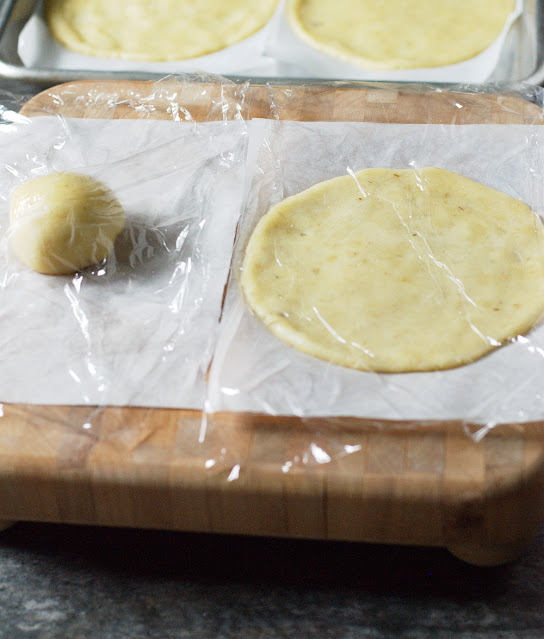 I also found the original fathead pizza dough a little fussy to work with. It has a greater proportion of mozzarella cheese, so as the dough cools down, it starts to harden and become difficult to work with. You can pop it back in the microwave periodically to soften it, but it’s a bit of a hassle. My version stays completely pliable and easy to shape, so there’s no rushing or re-microwaving needed.

The other thing that’s a little different about my recipe is that I make the dough into individual 6″ personal pizza size. I do this because I’m the only person in my house interested in low carb pizza and I don’t care for leftover, reheated pizza.

Homemade personal-size pizza isn’t a new concept for me. I’ve been making it for years, both in the oven as well as on the grill. A number of years ago, I was the pastry chef for an upscale bistro, in charge of all the bread and pizza crusts, as well as the desserts. One of the most popular items on the menu was a personal pizza special that featured different toppings each day. I prepared the dough bases and partially cooked (‘par-cooked’) them on the grill for a smoky flavor and grill marks. They were then chilled down, wrapped, and frozen. When the cooks on the line received a pizza order, they would grab one of the frozen crusts, top it, and put it in the screamin’ hot pizza oven. Handcrafted and ready in a matter of minutes.

As I’m writing this, I’m wondering why I haven’t tried the low carb version on the grill. I’ll have to do that soon and report back to you. 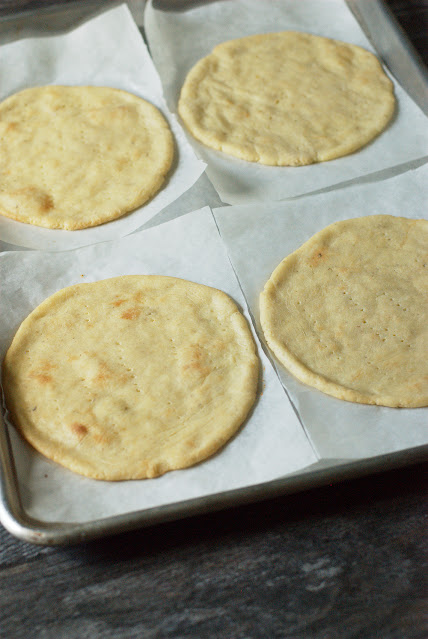 At any rate, let me point out that although these crusts may seem small, they are loaded with protein and fat. Just the crust contains over 12 grams of protein, which is the equivalent of nearly two ounces of chicken or beef. They really fill you up and keep you feeling full for a long time. Unlike pizza made with grain flours like wheat (or gluten-free flours like rice, corn, and tapioca), they don’t spike your blood glucose and have you looking for a snack two hours later. My husband, Dale, is a skinny guy. He’s never eaten a ton of food, but when it comes to pizza, his stomach capacity seems to double. The man can seriously chow down on pizza. I guarantee that he would never be able to eat a similar quantity of this low carb pizza.

These low carb pizzas really are family-friendly. First, they can be customized to each person’s individual tastes. No more whining about ingredients they don’t like. (Yes, Dale, I’m talking to you.) Second, the dough is so forgiving and easy to shape, the kids can even pat out their own crusts and add their own toppings. Third, unlike “real” pizza, these are actually healthy! Add a salad and it’s a perfectly balanced meal.

For toppings, you’re limited only by your imagination. I found that for each 6″ crust, the following proportions seemed to work well:

Two of my favorite pizzas are the ones featured in the photos: 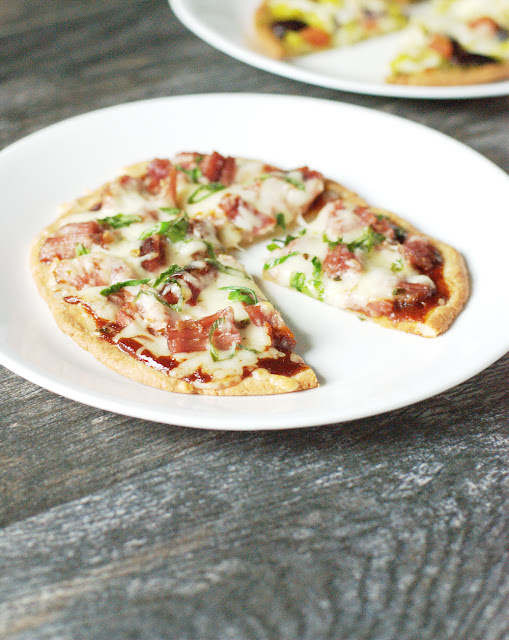 I thoroughly enjoyed tasting my photo props! I couldn’t decide which one I liked better because they were both so delicious. Next time, I’m going to double the dough recipe and make 12 pizza crusts for the freezer. They’re the perfect size to bake off in my toaster oven. It’s hard to beat homemade low carb pizza in less than 15 minutes!

Seriously, it’s past time for you to have some yummy low carb pizza. Don’t be intimidated by this goofy recipe, because it’s really not difficult — just give it a whirl. I can’t wait to hear what some of your favorite combinations of toppings are! As always, let me know if you have any questions.

These crispy thin-crust personal pizzas with your favorite melty cheese and toppings really deliver on taste and texture. The partially-cooked crusts can even be made ahead, topped to order straight from the refrigerator or freezer, and baked off for piping hot, melty goodness in less than 15 minutes.

2 ounces or so of protein and/or veggies

*I use Living Cookbook 2015, along with package information and data from www.nutritiondata.self.com, to calculate the nutritional information for my recipes. Thus, I can make no guarantees as to the accuracy.